Stages of Healing the Wounded Feminine: Dissolving the Scars of Patriarchal Abuse “Part I: The Wound” by Anyaa McAndrew 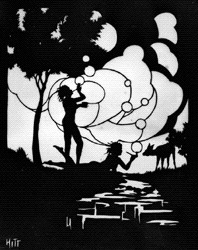 The Sacred Feminine, the Empowered Feminine, the Divine Feminine. These words evoke images of a large luminous being, goddess-like, regal, and leading the way to new world, to heaven on earth. Her radiance would cause all war to cease, and the feminine principles of compassion, cooperation and community would prevail. All beings would live in harmony with nature.

Thanks to first and second-wave feminism, through the efforts of the earlier suffrage movement, and the feminism of 30-40 years ago and now third-wave feminism of today, the feminine has been somewhat restored. Women now enjoy some measure of equality and respect. At the time I write this, Senator Hillary Clinton is one of the candidates for the Democratic nomination for the presidency of the U.S; a remarkable feat when we consider that the fate of women in the 50’s was to choose housewife, mother, nurse, teacher, factory worker, sex worker, or mistress as their life purpose.

Women in general are full of themselves these days; full of power, authority, self-confidence, self-esteem and self-love. I love working with women to facilitate this fullness! We’ve come a long way, baby! Many of our gains have come from our courage to move forward and take risks to be more than our mothers, to find a bigger Self among the remains of previous generations.

My personal experience is that women are infinitely creative, yet practical when it comes to getting what they need to take care of themselves and their children. When given the insight and the opportunity, they can be even more creative and determined when it comes to climbing out of bad relationships, stuck patterns and old paradigms. Perhaps this is because we have been shut up and shut down for the last two to five thousand years of patriarchy, under threat of rape, and worse. We understand what it means to be patient, to bide our time, and then venture forth when the coast is clear. The coast has been clearer than anybody can remember, but there are still some big shifts to make.

Women may be more powerful, but they are generally not happier. Although it may be simply be more out in the open, women seem to be cheating, lying and sneaking in their relationships. Michelle Langley in her book Women and Infidelity describes the pattern. Women “push men for commitment, they get what they want, they lose interest in sex, they become attracted to someone else, they start cheating, they become angry and resentful, they begin telling their partners that they need time apart, they blame their partners for their behavior…and eventually, after making themselves and everyone around them miserable for an indefinite, but usually, long period of time, they end their relationships or marriages.” I hear from women who are not in relationships complain that they are not able to find men they can be with who are strong enough or able to be with them as equals. Then there are the women in relationships who are sex-phobic or attempting to live lives cut off from their sensuality and sexuality. Statistically, more women are experiencing female diseases like breast cancer, ovarian and uterine cancer, and they are suffering from more strokes and heart disease than ever before. I wonder how many women are still facing deep wounds beneath the surface of their busy, successful lives.

David Deida, teacher of the yoga of intimacy, says that the feminine grows through being love. Recalling the goddess-like archetypes, this sounds like the radiance of the Divine Feminine spreading her light across the planet. It is what Deida calls the 3rd stage feminine. 3rd stage relationships are interdependent rather than dependant or independent. In Deida’s model of consciousness for women, men and relationship, we must grow through 1st, and 2nd stages to get to the 3rd stage, which is a more developed and more integrated level of consciousness but one that includes the previous two stages. There is no way to spiritually bypass the former stages to get us to the later stage.

1st stage femininity is the woman in all of us who likes to pull out her feminine wiles to get what she wants. Manipulation through sexuality is the name of this game. Patriarchy and our western society have taught us how to do this very well. We have all done this kind of feminine seduction at some point in our lives, even if it was at 6 years old with our daddies. And, many of us still try it from time to time, and may be more or less successful! It is this consciousness that still reigns supreme in our mass media and youth culture. As women we all know that men want to please or rescue the feminine, so we will resort to 1st stage behavior when we need to. The shadow of 1st stage is pretty obvious. If we manipulate and seduce our way through life, we will attract those who will want to control and own us once they give us what we want. 1st stage feminine development is powerlessness from a victim perspective.

2nd stage femininity is all about consolidating a strong masculine self that has purpose in the world and can take care of us from the inside out. This stage of consciousness was born and developed for many baby boomers in the 70’s second-wave feminism. There was a popular saying at that time that says “a woman without a man is like a fish without a bicycle”! Men become optional, and relationship is between equals. The strong independent 2nd stage woman wants to be recognized for her masculine qualities: intelligence, successfulness, competence, etc.

This is a very necessary stage as women grow from dependence into independence. Without the 2nd stage, women are victims of their biology and the programming that would keep us barefoot and pregnant. The problem with 2nd stage is that it also attracts its opposite, which is a man that is feminized. Sexual polarity gets lost in 2nd stage relationships and often falls away. Women become dissatisfied with feminine men but don’t understand what it is they really want because a masculine man has become too threatening to their own inner man.

My strong sense from reflecting on my own development and from working with women for over 30 years, is that the patriarchy still lurks around our 2nd stage development. Many women are stuck in a very unhealthy version of the inner masculine which is naturally patterned on the men in their lives, particularly father figures, and on their mother’s own inner masculine.

Until a woman comes to terms with this unhealthy inner animus, she cannot move to 3rd stage consciousness, and stay there. I believe the animus is often contaminated by the inner patriarch, a force that author Sidra Stone, in The Shadow King, calls the invisible force that holds women back and keeps women subjugated to negative patriarchal judgments. Values like domination, competition, aggressiveness, confrontation, and criticism will drown out a woman’s ability to learn healthy male qualities like clarity, focus & intent, good boundaries, stamina, courage, persistence, etc., because she will always hit a ceiling of self-limitation, self-deprecation and low self-esteem based on the very fact that she is female. Upon listening to this internal critic, she might then tell herself it is because she is fat, single, unmarried, lesbian, child-less, has too many children, not smart, not pretty, too pretty or not educated enough, the wrong color or perhaps damaged goods, and eventually she may assume defeat in the face of everything that is wrong with her.

Einstein said that the problems of one stage of consciousness must be solved by a higher state of consciousness. But where is this higher order of consciousness? It is natural and healthy for the feminine to have a strong masculine to navigate in the world. But how do we develop this? Has the New Masculine shown up on the planet yet for us to learn from, or do we teach ourselves?

In my own life, my father was absent, alcoholic and emotionally immature. I considered myself fatherless, and I had no male role models, but that did not stop me from fathering myself. I was a hard taskmaster rather than a kind father to myself, because I had no one to show me how. My ambition to transcend my childhood drove me, and often still does, to the exclusion of balance and compassion for myself. My continual healing comes from realizing the feminine value of exquisite self-nurturing, and showing my inner masculine that I want to manifest this in the world in forms that are meaningful to me, such as abundance, time for things I love to do, a comfortable home, and a nurturing relationship. The more I do this for myself by showing up for myself, the more I manifest men in my life who are supportive of me and the less I deal with abusive and chaotic patriarchal forces within and without. Of course this does not mean my life is perfect, and that I am not human, but I find myself growing beyond the struggle mentality of my inner fatherless girl-child! I am learning to deeply relax and trust my masculine on the inside, which then manifests more on the outside.

Something else I notice in the women I work with is a certain cruelty or meanness in the way they speak about and treat the men in their lives. Instead of teaching their men to be with them in the way they want, there can be a tendency toward passive-aggressive withholding or even punishment in their relationships. I began to look at what I knew about addiction and recovery work for some clues.

In shadow work with women, I teach about the , also called the triangle of codependence. Women have been taught by our culture to be very good, even perfect codependants. We mostly indentify with being the selfless giver, a hold-over from our mother’s and grandmother’s earlier choices. Codependency is an addictive tendency to need the approval of others for our well-being. We internalize an inner Persecutor, a Rescuer and a Victim~Martyr that allows us to justify either over-expressing ourselves (rushing in, too much too soon) or under-expressing ourselves (holding back, too little, too late) depending upon circumstances. The P-V-R Triangle keeps us from moving through the 3 stages of the feminine into a healthy 3rd stage.

We will more consciously act out one of the three aspects and unconsciously act out or project the other two. For instance, many women consciously identify with being the rescuer, often called the caregiver, or caretaker. If we tend to rescue others, we are assuming that they are powerless victims, and that there is a persecutor somewhere. The rescuer projects victim onto whomever she rescues, and projects persecutor onto someone else she perceives as having victimized the victim she is rescuing. If she instead identifies with being victimized, then a woman will blame someone she perceives as her persecutor, and actively look for a rescuer. Few of us ever identify ourselves as persecutors. That aspect is almost always in shadow, so we tend to project it outward onto others, especially men, who have been a worthy target substituting for the patriarchy.

WATCH FOR PART II: The Stages of Healing