Las Vegas: The Good, The Bad, and The Very, Very Ugly 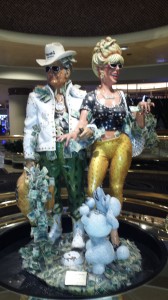 Wow, we just returned from five days in Las Vegas, and we are reflecting today on why we went, what the highlights were, including the hotels, the food, and the entertainment…in other words, the good, the bad and the ugly of Las Vegas and our trip.

First, why would we go to Las Vegas in the first place? After all…We consider ourselves “conscious” and “spiritual,” and, let’s face it: Vegas represents everything that is wrong with our materialistic culture, the epitome of over-the-top decadence.

It’s a place largely geared toward the narcissism of one-percenters and the one-percenter wanna-be’s. The answer to that very good question is that we belong to an amazing travel club we both love that allows us to travel, vacation, and work all over the world at wholesale prices, and they were holding one of their four yearly conventions there. We needed a venue that would hold over 12,000 attendees, and we – and over 12,000 others from all over the world – found it there. This isn’t about our convention, although we will say more about that later.

If eating healthy is important to you, you will have a problem in Vegas. While there a surprising number of organic restaurants there, you’re going to have to work for them. We only found one in a hotel and the Canyon Ranch Grill was hidden deep within the Canyon Ranch Spa in the shopping no-man’s land between the Venetian and the Bellagio hotels. Breakfast and lunch only, simple healthy food, nothing flashy, only spa decor. Otherwise, like most restaurants wherever you go, Vegas is a GMO/factory farm paradise. Lots of really expensive GMO/factory farm food….yes, mostly delicious, but you wouldn’t want to make a habit of it. Eating clean is one of our biggest constant problems when traveling.

And now for the ugly: Besides being the epitome of decadence and everything that’s wrong with modern culture, Vegas has a serious sustainability problem: A lack of water. 90% of Las Vegas’ water comes from the Colorado River that fed the largest man-made reservoir Lake Mead when Hoover Dam was completed in the mid-1930’s. The water level in Lake Mead is the lowest it’s been since the dam was completed. The lake provides water to somewhere between 30 and forty million people in seven states, as well as irrigating millions of acres of land. The area’s driest two-year-period on record spanned from 2012 to 2013, and the entire river system is now 50 percent full (or empty, depending on how you choose to view it). According to decades old agreements, Vegas can use water down to a certain point, but below that point, the water belongs to others, with California holding what’s called “first rights.”

The Vegas region is largely locked in into a limit of water it can take from the Colorado River that was set in 1922, when about 5,000 people lived in the area. Now there are over 2 million! The 19th century law is governing Western water law into the 21st century.

We spoke briefly to hotel employees and shuttle drivers about Vegas’ water problem, and there didn’t seem to be much concern, almost as if “someone will fix it.” Does that sound familiar? At this point the farmers in the area are on water rationing, but not the hotels or Las Vegas in general. But if this drought turns into a mega-drought – and scientists are already talking about that possibility – and Lake Mead can no longer provide water for Las Vegas, its tourist industry, and just for drinking, or to run the giant turbines that provide electricity for much of the west, we could see more than 40 million water refugees from all over the west looking for water and a new place to live. That’s why the Anasazi moved…

You can read more about Vegas’ water problem here: “it’s as bad as you can imagine.”

Somewhat ironically, we stayed at what is now called “Westgate Las Vegas.” It was a blast from 40 years past for Gary. It opened in 1969 as the International Hotel at the start of “the Elvis Years” in Vegas. Barbra Streisand was the opening night performer, followed immediately by Elvis Presley. Gary’s band S.O.U.P, was the hotel’s mainstay band in the 700-seat lounge theater in early 1970 and performed there for six months straight, opening for Kenny Rogers, BB King, Chuck Berry, Bo Diddley, Tony Orlando and Dawn and many others. It was also ironic because while Gary was performing there at the time, he couldn’t afford to stay there, and so this trip was the first time Gary stayed at the hotel he played at in his mid-20’s!

The old International Hotel has been through several incarnations. It became the Las Vegas Hilton, The LVH- Las Vegas Hotel and Casino – and now, The Westgate Las Vegas as of July 1st. It’s been remodeled several times, and the 700-seat Casino Lounge is gone, and the hotel is looking and feeling its age. We only saw one show, and in spite of the hotel, there was a great highlight: MTV’s Top Pop group in 2008, the A Capella group MO5IAC, “5 voices, no instruments,” was performing in the Shimmer Lounge and they were very, very good.  Tony Bennett called them the best vocal group he’s ever heard, and the group’s renditions of Brubeck’s Take 5, Queen’s Bohemian Rhapsody, and the human drum kit Jake’s “voice-drum” solo will freak you out. Don’t miss them if you get a chance.

As we said, we love our internet based technology driven travel club and the conscious way it does business and the opportunity it provides to be in charge of your own life, and that’s why we went. That was, for us, the good part: How a company can actually enhance lives, encourage members to work as a team in the truest sense of the word, and have a positive impact on its members and the people it serves and the people we serve.

The highlight for us was seeing how 12,000 people came together to honor the company’s mission of providing “fun, freedom, and fulfillment,” together, changing and impacting lives of hundreds of thousands of people through the business – the travel club – and the foundation, which among

other things, built over 30 schools in Central America in the past year, brings  clean drinking water to African villages, and builds basketball courts for impoverished neighborhoods all over the US….and we’re just getting started. Foundation service trips – voluntourism – to India, Vietnam, and Thailand are in the works, starting in September. We hope to fit in some of these voluntourism trips with our team in the next few years.

Overall, Las Vegas is a metaphor is the illusion of 3-D reality – and the illusion that there’s plenty of water – and the stripping away we are all doing to get to the bare bones of who we really are and what we are not. The Strip, and strip-tease are popular phrases in Vegas! The Mirage is a popular aptly-named Hotel in Vegas. If Las Vegas went away, we would see a vast seemingly empty desert, often a place we are drawn to go to experience our spirituality, without the accoutrements of ego and crass materialism. We are reminded of a dear friend who is experiencing a life-threatening illness and recently described his on-going journey of ego-disillusionment.

How do we bridge the worlds of our dying 3-D reality and the birth of a New Earth? Our visit to Las Vegas was a juxtaposition of those two worlds. From the tallest Ferris Wheel in the world we appreciated the beauty of this fantasy playground of structures that human beings have built.  We appreciate the talent of so many amazing artists, entertainers, and shows (did you know that Las Vegas hosts eight different Cirque du Soleils?). We could also imagine abandoned buildings and the desert taking over the landscape. There is beauty in that also.

transition with truth, beauty and love, while we enjoy fun, freedom and fulfillment.

That is probably the best that we can do.

It is our time to be the bridge, the portal openers to the New Earth…..bring on the birthing.

And while we might visit there again given the opportunity, if we lived there, we’d be thinking seriously about getting out of Dodge while we still could!