Callanish, the Sacred Feminine and the New Earth: On the Grand Cross of 2014 by Anyaa McAndrew

When we know about the sacred timings, and choose to participate in them, we have the capacity to influence the outcome of things. Events are not pre-determined. Consciousness is what the Universe is made of, so as we add our own conscious intent to the great forces at play, there is the possibility that we just might help move events along in a direction that we want them to go. In this case, our direction and intent on our trip to Scotland was to re-connect land and sky, soul and spirit, masculine and feminine as it once was in pre-patriarchal, pre-Celtic, Neolithic times.

Twenty-seven of us of us communed on the Ilse of Lewis, in the northwest Hebridean corner of Scotland at a cozy little hotel called Doune Braes, very near the great 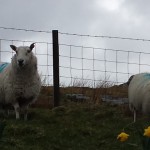 standing stone circle of Callanish. Some of us astrologers, some psychotherapists, healers, writers, teachers, householders; we were ordinary mystics gathering in extraordinary times. Our places of origin: South Africa, Australia, England, the Philippines, the US….representatives from far and near called together for a grand council!  Our diversity spoke to the appeal of this particular time and place, as travel to this edgy remoteness was not easy. We arrived weary and full of anticipation. We meshed together as easily as the thick-coated Highland Sheep roaming the hills together, as easily as the countless daffodils springing up from the peat, yet we were not here to mindlessly agree. Each of us took our own colorful place on the wheel for the work we came to do. 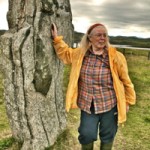 At times we were joined by the Great Dame of the stones, Margaret Curtis, the resident Archeologist and “Keeper” of the Callanish Complex for over 40 years. Margaret knows more about the stone circles here than anyone, having written several highly researched works over the years. She understands as much about the astronomical timings and the stone builders as anyone, yet there are way more mysteries to these stones than present knowledge. Margaret is getting older, and is not as able as she used to be, so we took the opportunity to deeply honor her amazing contributions. She is one of the treasures of the Callanish Mysteries.

Chosen by Daniel Giamario, our beloved Shamanic Astrology Merlin, our sacred timing was within the window of the full moon lunar 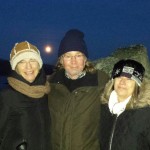 eclipse in late Libra on April 15th, and then extended into the Grand Cross, as this glorious revolutionary planetary structure built itself throughout our week, with Uranus, Pluto, Moon, Mercury, Jupiter and Mars squaring up to rock the world. We launched into our own work as sacred activists, diving into Shamanic Breathwork TM, which served to activate the shaman within us and help us journey to the Otherworld of the Celts where we could begin to feel our own personal connection to this ancient place.  Interspersed with daily trips to the main Callanish Complex, and the surrounding stone circles, many of us had profound personal experiences with the stones. These are great beings with individual personalities, and the power of their presence can be overwhelming. There is a heart~soul opening that often happens, as it happened for me the first time I met the stones in 1998. Daniel Giamario told us stories about the stones and the peoples who built them, and with Shamanic Astrology teachings and experiential understandings of our own charts, along with Nita’s creative journaling and art, we wove together a sense of why we were invoking a renaissance of the sacred feminine. We learned how the last 6,000 years of patriarchy have been an aberration in human history, in Daniel’s words. The pre-Celtic peoples were one with the land, and the land was the feminine principle, the Sovereign Goddess. It has been the last strange period, including monotheistic religions and dominator hierarchies that have created the separation between earth and sky, feminine and masculine, soul and spirit. Our time is now to bring the worlds back together, not to re-create the past, but to bridge the worlds so that we can finally move into creating a new world. 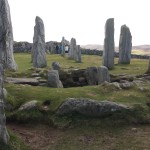 ext we worked the ancestors, and several in our circle had personal revelations about Scottish ancestry, and past lives, and much of what happened around this moved us all. We were able to do some major forgiveness work around our warring Celtic ancestors and any other personal ancestors whose lives were filled with rivalry, betrayal, vindication, jealousy, greed, lust, competition and war. We came to understand the strong nature of the Celtic women who were warriors and went to battle with their men. Although we tend to romanticize the Celts, they were doing what they had to do to defend against the onslaught of patriarchy as it descended upon the land. Then they became the patriarchs. Their own neolithic ancestors where probably a peaceful people, and new archeological evidence is showing us that it may have been this way for many thousands of years. As a credit to the ancestors, we kept asking them for good weather, and the skies cleared every time! We are pretty sure they approved of what we were doing.

The split between the masculine and feminine was also on our agenda, and we used Shamanic Astrology as the vehicle to access these inner archetypes, and then bring them together in a higher octave of service to self and the planet, that dissolves the separation between them. In several powerful ceremonies on the land among the stone circles, during moonset at the eclipse, sunset or moon rise, we lifted our intentions for forgiveness, reconciliation, sacred union, and new earth co-creation to the sky. 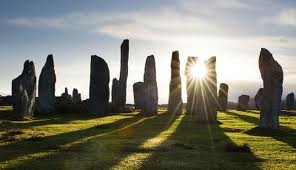 collective of colorful soulful characters, we actualized our purpose for coming together. We call ourselves The Callanish Clan. For 8 full days in a hearty Scottish spring landscape, with plenty of porridge, great yogurt, delicious dinners (with too many chips), and our awesome Doune Braes Hotel hostesses, enlightening teachers (including myself, of course, and Nita Gage!), awesome Celtic Music & images, lots of laughter and fun, and a cozy group room with green tartan carpeting and a stone fireplace for our altar, we connected heaven and earth.  The Grand Cross is still working us and the world, and the next eclipse is a solar eclipse on April 29th. But our intentions for a New Earth are in the mix, and we will see what happens from all that work we did.

Stay tuned for 2015 journeys to sacred Celtic landscapes. We will continue to expand upon the theme of the Renaissance of the Sacred Feminine, through the vehicle of Shamanic Astrology, clearing ancestry and co-creating powerful ceremonies for a new world. All three of us are optimists: we see this world coming into view, and ask that you help us hold this vision. Join us for an upcoming magical mystery tour! You can keep in touch with our plans by signing up for my periodic newsletters here.

To read more about these recent powerful astrological alignments, go to:

Cayelin K Castell (SAMS co-founder)
Began writing the Celestial Timings in 1996, offering a unique look at the astrology and astronomy of each month and each day. She now offers not only daily written version but also weekly, monthly and topic specific audios. Current Free Celestial Timings