For “Lucy” R.I.P. (and others like her) by Anyaa McAndrew 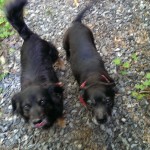 In the past several months I have been feeling more deeply than usual about animals.  Sweet dear innocent animals, those that have been companions to my friends, have been leaving. Every time it happens, I drop into grief. I grieve for my friend and his or her loss, and then I remember the loss of my closest friend in the world, Miss Lily, an extraordinary Westie dog, who left me at 15 years old, about 7 years ago.  That loss was the hardest I have ever experienced, because I gave her the gift of euthanizing her when it was her time to go, and it was an excruciatingly painful act. I miss her terribly, and I often think about seeing her again in another world. Now I have 2 cats rescued from shelters, and 3 dogs, one rescued by a rescue group, one we rescued from an ad on freecycle.com, and one inherited by my stepfather who died. My ex-partner has the last one.

Once I tap into that grief, it blends into the losses of life in general, the disintegration of our planet, and loss of countless animal and human lives each and every day, including 200 species a day going away. After all of that, it becomes easier to also grieve the recent loss of my relationship, a marriage of 5 and a half years, and a relationship of 9+ years.

Clearly, I have a strong empathic relationship with the animal world, especially the plight and circumstances of companion animals. Once a few years ago, I spent several months volunteering at a cat shelter, brushing and talking to 70-80 cats once a month or so, just to move beyond my over-sensitivity to their plight of being abandoned or dumped or abused by the people in their lives. I never made it to volunteer at the local animal shelter (which is a kill shelter) because I did not have the courage. I still don’t.

About 10 days ago, 2 sweet small elderly dogs were dumped near the entrance to our community. Three of us took responsibility for them and they stayed in a wood shed for several days. We got them bathed, and fed them, and spent some time with them. I named the girl-dog Lucy, because she looked like my sister’s family dog from the past. The boy-dog we named Winston. We had concern for their health because Winston has some tumors on his body, and Lucy was shaky, weak and possibly vomiting with diarrhea. We all tried desperately to find a rescue group to take them or a family to adopt them or foster them, but the shelters were all full, or we were asking from the wrong county, or the rescue groups were in overwhelm. Finally a compassionate animal activist called in a favor and we got them into a shelter in the next county. I picked them up at our sister-friend’s woodshed a few days ago, and noticed that Lucy was weaker than ever and shaking badly. When I left them at the shelter, I asked the staff to please get her examined quickly.  I left them a good amount of food, a check for $200 for the rescue group, and a bottle of Rescue Remedy (to my astonishment they had no idea what it was), asking them to keep it in their water, explaining that it clears trauma in people and animals. I called the rescue group that was going to pick them up and asked them to please tend to her medically as soon as possible. I was assured that it would happen ASAP.

Today I called the shelter to see how they were doing, and was told that Lucy had been found dead this morning.  She was not taken by the rescue group yesterday because they found lots of ticks on both dogs so they were “treated”. “Treated” means chemicals, and I am pretty clear that in the condition Lucy was in, the last thing she needed was a big dose of chemicals. What she needed was an emergency vet to examine and treat her for whatever was ailing her.  I regret not taking her the vet 4 days earlier myself. I hoped she would be “rescued “ by someone else so I would not have to put out the funds to pay for emergency treatment. If I had not been so busy, so pre-occupied, so unwilling to stretch myself further, she might still be alive and be on the way to recovery. She was clearly suffering and I just did not have the time to more fully tend to her. There are lots of ways this could have worked out and she still might have died. I will never know.

I am grieving for Lucy tonight. She was a sweet being who did not deserve to be left alone in her pain. She deserved to be treated with love and respect.  She was probably a family dog at one time who lived in service to her people, who brought love and joy to those around her. She was a good dog.

The people who dumped their dogs in our community and left them to fend for themselves created bad karma for themselves. They created a ripple effect that has affected many beings over the past several days. One of the effects is that hearts have been stretched open, prayers have gone out. That’s not so bad. Another effect is that service agencies, volunteers and people like us have been taxed and strained and stressed. The biggest effect is that a presious life has been lost. Another effect is that Lucy’s brother, the one we call Winston, is now alone, and probably grieving as well.  his grief will likely be ignored in the throng of other needs. He has lost his lifelong companion. Maybe the people who did this have been feeling regret and wondering what happened to their dogs. Maybe they will wake up a bit, and eventually pay back their debt to the animals. I can only hope.

Here is the south we have more homeless animals and mistreated animals than anywhere in the US. In our mountains dogs are left in cages in the heat and the cold, only to be left out at hunting time. Yesterday I heard from a friend in Minneapolis that their city just received 150 homeless dogs from Texas. A plea was broadcast on the evening news encouraging people to adopt one of these animals! Thank Goddess for the rescue agencies in Texas and thank Goddess for the companssionate people of Minneapolis.

So, I am writing this for Lucy, in hopes that even one person who has ever abandoned, abused, ignored, or betrayed a companion animal or an animal in trouble will read it, and think twice about their choice to abdicate responsibility or the choice to assist.  I am writing it in hopes that even one person who never steps up when they are given the opportunity, will decide to step up and help, to foster, to host, to make a phone call, to donate some money, to assist with a fundraiser, to carry food in your car for hungry animals, to adopt a homeless animal, to take a chance on a dog or a cat and make this being a part of their life. Maybe you do it all the time, because those who do it tend to take on more than their share. Maybe you have never done it, and maybe it is your turn to do it. Maybe it is time for you to speak up or to stand up when you witness the way an animal is mistreated.

I personally will make a choice next time that will be more heroic, more caring, more daring. And, I really hope I don’t have too many opportunities because I am pretty raw from this one.

Lucy’s necropsy found that she had an overgrowth of whipworms, and that is what killed her. If she had been wormed earlier, her death may have been prevented. Sarge’s said it is very easy to treat. Winston is at Sarge’s rescue shelter in Waynesville NC and is doing well. He was de-wormed, had his shots and is headed to the vets to be neutered soon, as well as to have two growths removed. We will see what the say about these growths…hopefully they are benign. Check back as I will post it here next week.