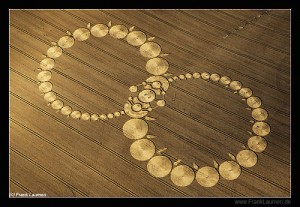 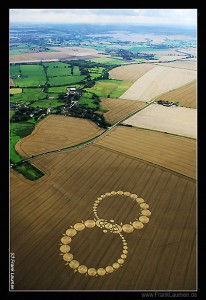 Here are some of the juiciest comments on the recent Infinity Crop Circle at Milk Hill in Wiltshire from this website, which has some amazing pictures as well!

Synchronicity appears in a Fields of Wiltshire

The number eight is a very meaningful number to the Chinese as it is also to many religions of the world.

The sheer scale of this formation is a marvel to behold. Many people were walking among its many circles in awe and wonder

Astronomy 101 for a lunar eclipse

I will wait a few days to let other people comment about Milk Hill of August 8 before sending detailed slides. But if anyone can’t see that it refers to an upcoming lunar eclipse on August 16, then they might wish to enrol somewhere for Astronomy 101!

Each big circle of balls of increasing size shows an almost complete lunar phase cycle of 22 days (where the full number equals 29.5). Then 14 or 15 small “spikes” between balls tell on which days our Moon will appear above the horizon at sunset, moving west to east each day, so as to lie eventually opposite the setting Sun on August 16 (the exact number of days equals 14.75). Similar symbols were shown in lunar-phase drawings from Stonehenge 1996, Windmill Hill 1996, Milk Hill 2001 or East Field 2007.

At its centre, we can see the ancient Celtic Cross symbol for “planet Earth” (from Wiltshire 1990-1992), superimposed partly on the largest ball or “full Moon” which has been already 15 days above the horizon at sunset. On that day–August 16—planet Earth will come directly between our Sun and the Moon, so as to create an 81% partial shadow on the Moon as shown. This is all just first-year textbook astronomy, and it goes to show how much their culture values knowledge of the natural world over ours.

The Mobius Strip is an expression of non-duality. It reveals the Unity of all polarities, creating a state of Oneness, joining the whole and the part, the masculine and the feminine, expansion and contraction, spirit and matter, etc. Everything is One and nothing can be separated from anything else. All is completely intertwined, infinitely. The Mobius Strip is a spiritually significant symbol of balance and union. (Yoga=Union) The Buddhist philosophy of Tantrism also is expressed by the Mobius Strip shape. “Tantra” is continuity; the word derived from the root ‘tan’, meaning to extend… extend continuously, to flow, to weave. The continuum is descriptive of the Nature of Reality, by contemporary physicist David Bohm…”a single unbroken wholeness in flowing movement.”

The Mobius Strip has evolved out of the realm of Sacred Geometry, along with the Egyptian pyramids, Mayan temples and the perfection of a chambered nautilus seashell. The mysterious crop circles arising in North Somerset and Wiltshire, England depict the Mobius Strip, also. These geometric forms stimulate our inter-related connection with Nature, awakening to the beauty and power of Life.

Number 8 represents infinity. its has the profile of the Mobus strip. in fact the Mobis strip — a distorted one — is a circle. symbol of completion and wholeness. but 8 contains 2 circles.

therefore 8 represents a completion, like the circle, but on a new level, or another octaves, an end and a beginning. the no. of days in a week is 7, but the 8th day, say a Monday, is the beginning of a new week. in nature every 8th wave arriving at the the sea shore is bigger than the rest. in the same way, in music, the 8th note is another octave.

8 hertz, very interestingly, is the brainwave frequency healers and mystics most tune into. furthermore, 8 hertz is Schumans resonance the frequency of earth (earth vibrates). humans cannot survive without it. astronauts need a 8htz generator to maintain health. life depends on that frequency, otherwise we would not buzz. its a common alpha frequency mediators frequency slip into for so called ‘expanded consciousness’ .

my personal take on that is expanded consciousness is a descriptive term to what is happening to you. Your thoughts travel outside the confines of the cranium. Your mind goes beyond the cavity of the head and travels to that on which it thinketh; without you having to take the physical luggage of the brain. Hence, we expand. we think not with the brain (a common misnomer), as we already ARE, and always were even before you were born (surprise!!). 8htz is the doorway frequency to that ‘many other state’ consciousness.

8 represents the pranic body in Tantric Numerology the 8th element is oxygen. 8 is the breath, life-force, connection to energy, healing.

The horizontal figure 8 is the symbol of infinity, also called the Lemniscate, which is the sign of the holy spirit.

I live in Buenos Aires Argentina and I always visit your web site. For the last 7 years I’ve been studying the Mayan culture. We are a group of eight and we get together every week to study. A few months ago we noticed that some crop circles contain numbers referred to the Mayas. But our surprise today is beyond anything we could have dreamt.

The circle which appeared today below White Horse Milk Hill Stanton St Bernard with an eight figure has a unique message. There are 21 circles on each side and 9 in the center ring. The circles appear to follow a pattern in size which made us think of Phi. So we did this: 21*1.618039 = 1596

Why is this so important? Because there are only 1596 days left before the end of the Mayan Long Count which ends on December 21st. 2012!!