Laughing at Power a blogpost by Chuck Willhide 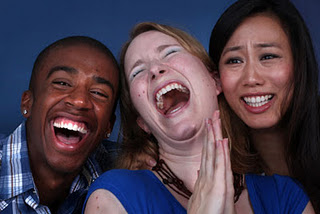 In one or several of the martial arts, not sure which ones, there is a Chi blocking technique used to try to disarm an opponent’s energy field or protective shield just before engaging in one-on-one fighting. It is to quickly take your hand and make a swooping motion from the top of the opponent’s head and then down through the center and lower chakra areas without even touching the opponent. This apparently reduces the ability of the opponent to defend himself/herself and even weakens the opponent’s overall strength. More on this later.

With the overwhelming evidence of the inadequacy and increasing irrelevance of governments and corporations around the globe, it has gotten to the point of absurdity and sometimes even hilarious. Take for example the fact that the FBI arrested several Amish farmers months ago for delivering raw milk across the Mason/Dixon line. Wow, who saw that coming? Amish activists/terrorists will be the death of us all! The Amish must have a secret agenda to kill all of us with their raw milk so they can take over the world! We must have our government protect us from these evildoers!

I just realized that our government draws a very fine line between activist and terrorist, because now you can be arrested for either and treated as an enemy combatant, thereby being detained indefinitely without trial, even if one is only thinking about or planning to deliver raw milk across state lines. Can you say, “Minority Report?” You can easily imagine this scenario being played out as a scene right from that movie…”Mr. John Hochstetler, you are under arrest for the future smuggling of raw milk into the state of Maryland.” You can’t make this crap up! Okay, maybe I made up the “Minority Report” thing, but we’re really not that far off. If this weren’t so hilarious, it would be insane…or maybe the other way around. Anyway, this brings me to my point.

How many times have people all over the world marched in protests by the millions only to have little or no affect on the status quo? Obviously, there have been exceptions to this throughout history, but I think there are ways we can kick it up a notch. But also, how many times has truth been spoken to power, even in a formal political forum, and it actually made a difference? Again, I think you will agree, not that many. Here’s another; how many times have we elected new politicians into office only to end up eating the same crap we kicked their predecessor out of office for? I know, a lot, right? In other words, it seems that no matter what serious action we take, protesting, speaking out or voting, nothing, for the most part, seems to change for the betterment of the masses.

So I’ve come to the conclusion that we take ourselves and especially politicians way too seriously. We need to lighten up! It is time to start finding the humor in life and laugh at ourselves and at the people we vote into positions of power.

I can remember some of the hearings Congress would have with people like Donald Rumsfeld and BP oil executives when there would be protesters who would start yelling in opposition to a position someone was taking in the hearing. Within a few seconds, they were taken away by security guards and the hearing would continue somewhat unfazed by the disruption. So I thought it might be a good idea to instead of yelling in such a serious action, that it would be better to just laugh hysterically. Of course, maybe yelling out the occasional, “You can’t be serious, ha, ha, ha,” or, “You’re kidding, right? Ha, ha!” Laughing at power makes many statements, often without saying anything. It says, “we are not taking you seriously” or “we have zero respect for this clown act” or “this government has made itself irrelevant” or”you have no power over us” or “this is so ridiculous, it’s hilarious” or “you’re joking, right” or “are you crazy?”

In my judgment, this is a form of Chi blocking, as I spoke about above. It is also a form of reducing the ere of seriousness and power to child’s play. That’s how I really feel about some of our politicians; that they just never got out of their school-yard-bully phase. Besides, I think we all have felt a little bullied by our government and certain corporations at one time or another. Yeah, you know what I mean…they keep trying to take our lunch money and wanna push us down in the dirt.

The only problem I could possibly project would be an angry and raging reaction from the bullies to the people who are doing the laughing. What could be the possibilities there? Maybe the laughing activists could be subjected to completely unreasonable arrests, searches, detentions, drug tests, etc. But what I believe would actually prevent such ridiculous tyranny, would be the fact that the laughing action would be done in complete public view. Think about it. The media coverage on something like this would be priceless! Imagine the headlines…”Activists Get Arrested for Laughing!”

Obviously, it is impossible to predict the reaction and outcome to the action of laughing at power, but I think it would be really interesting to see what happens. I mean, what do we got to lose? We’ve already tried a lot of things. So it remains to be seen what the power of laughter really holds for us.