Gloria Steinem: We Are Not Done! by Anyaa McAndrew

by Anyaa McAndrew | Mar 10, 2014 | Articles by Anyaa, Of Interest to Men, Of Interest to Women, Politics, The Divine Feminine, The Solar Feminine: Women Co-creating a New EarthLeaders | 0 comments

I had the honor of attending a lecture at Western Carolina University here in my mountains of North Carolina…a remote place for sure to see Gloria Steinem speak! But, what an amazing opportunity it was. Gloria turns 80 in a few weeks. Dressed in a simple black jumpsuit that belied a tall slim figure, hair tied back in a braid,  there was little sign of alteration to Gloria’s natural beauty other than a few gray roots in her reddish hair. She was her usual straightforward self, admitting to us that although she was asked to speak about the changes she saw from the 60’s till now, she did not tend to look to the past, but lived in the future. So, getting this opportunity to compare her view from here to back there, she spoke a version of her famous quote:  “The truth will set you free, but first it will piss you off!” She confirmed that there were lots of things to piss us off these days, the condition of women’s rights in the U.S. and in the world on top of the list. Gloria feels we have made only incremental changes, and if we invested in women the way that we invested in bailing out banks and corporations, the return on that investment would have been all the economic stimulus we would need.  Women don’t tend to put their money in Swiss bank accounts, but to spend it for the good of their families and communities. “It is more rewarding to watch money change the world than to watch it accumulate.”

We tend to think that feminism is old-school, over, done, passe’, but the truth is that we are just getting started. As long as there is racism, discrimination, reproductive coercion and repression, class-ism, heterosexism, and patriarchy, there has to be feminism, says Gloria, because it is all just imperialism towards one group or another. The core abuse is towards women, because as long as abuse and violence towards women is tolerated, every other form of abuse will be tolerated as well. We have made little progress in the 47 years since the 60’s, because the God we worship still looks like the ruling class, and that means we are still in deep trouble. Gloria said many times in her talk that there is nothing wrong with the majority, and that most of us are aligned with women’s economic and reproductive freedom. The issue is with the 1% who still holds onto the power over. The old boy network is still in charge and has in fact taken over many states. We must stand together to shadow our state legislators, demand fair voting districting, and do our part to stay as aware, active, and attentive as we can every day. The empowerment of women is still ridiculed and it is still threatening to the 1%. We can continue to stand up and speak out. As Gloria says: “Women may be the one group that grows more radical with age.”

And, I love Gloria’s definition of feminism: “A feminist is anyone who recognizes the equality and full humanity of women and men.”

Enjoy this very entertaining and moving TED talk by Isabel Allende from 2007: It all still rings true-true today in this time where our greatest hope is that the patriarchy will have a good death…..soon, and that women can finally come out of the shadows and into the sun of a new day on this precious and abused (feminine) planet. 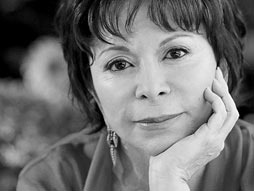