It’s widely acknowledged by those attuned to the energies of the Earth that much more balance is needed. The Divine Feminine, once a powerful force on the planet, has been overshadowed by a patriarchy that diminishes the presence of the feminine. The result: few women in the role of spiritual leader and a culture lacking in compassion and nurturance of all. Cries can be heard, if one listens carefully, for the sacred feminine to be restored as an equal player in the consciousness of this planet.

McAndrew’s work is grounded in Transpersonal and Shamanic psychology, as she walks the spiritual path of the Goddess. Anyaa is an ordained Madonna Ministry Bishop, a Magdalen High Priestess, a Certified Shamanic Astrologer and Shamanic Breathwork facilitator, and teacher of Tantra and a Certified Imago Therapist. Her Priestess Circles empower women to reclaim the lost soul essence of the priestess within, while learning to walk in the underworld of their own fears to gain power, playful passion and magnetism.

She spoke with Edge Life about the role of the Priestess and why the awakening process is vital in the lives of those who experience it.

For those who have never heard of the Priestess Process, describe its intention and for whom it’s intended.
McAndrew: The Priestess Process is intended for women only and women who are interested in expanding their spiritual life and also stepping more into their own personal and spiritual authority. It is to assist women in stepping fully into their spiritual authority, their personal authority, and also something that we call “individuating from the patriarchy.” A lot of us feel like we’ve done that, but there are little places in our psyche where we’re still attached to the patriarchal culture, so the process really gives us an opportunity to be centered around our own Divine inner feminine.

Regarding the patriarchy, do you mean that within women there is still something within them it’s okay to go along with it?
McAndrew: We do an interesting process on the second weekend. It’s a process of getting in touch with what we call our inner patriarch. We’ve found that the inner patriarch is an aspect of the super-ego, like the inner critic or the inner judge, and it gets passed down to us from our mothers. It’s a set of unconscious beliefs and judgments and rules about women and about how to get along in a patriarchal world.

In our process, we interview each other and get to hear our own inner patriarch; it’s a sub-personality, so it comes through in this exercise. We get to see those limiting beliefs. Each woman has a ceiling, and that ceiling is a place that each of us have to push through to be able to be a woman of power. These internal beliefs would have us believe that, somehow, women are inferior, or we should keep our mouths shut.

All of this was created in the Collective for good reasons. If you think about it, 200, 500, 1,000 years ago, for a woman to be in her power meant certain persecution or even death. So these rules, or this inner patriarch, that’s been passed down from generation to generation…

Protected them in the past.
McAndrew: Yes! It was a way for our mothers to actually keep us alive, to keep us safe. So, that’s an example of what I’m talking about in terms of the individuation process.

You have indicated that the centerpiece of this work is the living ceremony, in which one is connected with the Priestess Oversoul. What is that — and why are people disconnected from it? Why is reconnection important?
McAndrew: Almost all of us have been indoctrinated in some kind of religious form, and those religious forms have become very stale over time. Rituals that are used in various religions don’t have any life force left. Living ceremony is a way for us to ceremonialize in the moment with individual and Collective intentions and lift them up them to Spirit, to bring Spirit into matter. Ritual is something that most of us are fairly disconnected from, because of religious indoctrination. Bringing the life force back into ritual and ceremony really brings the magic back into life.

What is the connection between the Priestess Movement and the planet itself?
McAndrew: We saw with The DaVinci Code going to the bestseller list in no time at all that there’s definitely a connection between the Earth and the Divine feminine. Men and women are very curious about the whole concept of the lost feminine on this planet — and the power of the feminine. The connection with Mother Earth is that unless we wake up and begin to understand that all life is sacred, then we’re most likely doomed. We may not destroy the planet, but we’re certainly going to destroy ourselves.

The feminine is very much connected to the planet, connected to what we call Gaia, the Goddess of planet Earth — and to the whole idea of embodied soul in these times. It’s no longer about us leaving our bodies, which would be akin to leaving Earth. There’s a whole Christian perspective now that the environment doesn’t matter, because we’re going to ascend anyway.

The Rapture.
McAndrew: Yes, the whole Rapture thing, which is very dangerous. The task now is really about creating celestial Earth, about bringing Spirit into our bodies, connecting with our bodies, and connecting Spirit to Earth.

What effect has the popularity of The Da Vinci Code has had on women and their spiritual paths?
McAndrew: I think it’s truly made it okay for women to begin to talk about the Goddess, to talk about the Divine feminine. The fact that so many men have read The Da Vinci Code, and so many men are opening up to the concept of the Divine feminine, has had almost a direct political impact.

In fact, there was a man in Portland with whom I had a conversation. His daughter completed part of the Priestess process. One of the things that he said to me was, “Anyaa, in looking over what it is you’re doing, I truly believe that what this is about is the Divine feminist.”

And I thought, “Wow, that’s a really interesting concept.” I come from the feminist movement in the 1970s, but in those days, spirituality and politics couldn’t survive in the same room, and now they’re finally coming together. They are surviving in the same room. You don’t have to not talk about one to talk about the other. You can talk about them in the same sentence.

To what extent is the Priestess Process a journey into one’s shadow, with you guiding them through the darkness and back out again?
McAndrew: It’s very much about that, because when we create our intention statement in the beginning of the process — when we do our initiation into the process — I tell the women that when you step into any kind of initiation, it will result in some kind of a psychic death. We live in very shamanic times, and the shamanic element is really about conscious death and rebirth. Whatever needs to die, whatever is in our shadows that needs to come up, whatever is not about our intentions for the process, will come up in the nine months so that it can be transformed, so it can be burned away, so that it can be brought into the light, so it can be integrated — whatever way those shadow parts of us need to be worked with.

Sometimes they just need to leave. Sometimes they’re aspects of our past that we speak into when we tell the stories of our spiritual journeys, and it might be some aspect of our past that we’ve been holding in secret. Once it’s spoken, then we’re complete with it. Other times, it is a part of us that we feel is unhealable, or parts of us that just need to be exposed to the light.

I’m wondering if that is something that all the women who come into the Priestess Process share: a stirring inside that they need to go through that journey.
McAndrew: Some women who come into the process just get an inner message that they’ve got to do this. They don’t know where it’s coming from, and usually it’s coming from some aspect of their Higher Self. I usually ask women to ask for a message from Spirit, or ask for a message from the Goddess, to see whether or not they want to do the process. Other women come into the process because it sounds cool, and they get to dress up. I’ve heard women talk about that, and that’s okay, too. Or they want to hang out with a group of women, and their friends are doing it and it seems like the “in” thing to do.

And then other women — maybe they’ve been on the spiritual path a little bit longer — just know that this is a piece of work that is absolutely essential for them to become whole.

Regardless of the reasons, do they all come out to the same place at the end?
McAndrew: We say in the process that each Priestess is in her own way and in her own time. By the end, I think that the magic and the power of the circle itself brings the women into a common place so that there’s a harmony and there’s a connection that allows each woman to feel okay, to feel good about where she is on the Priestess path — no matter how much of the archetype or how much of her own power she’s been able to own in the process.Â 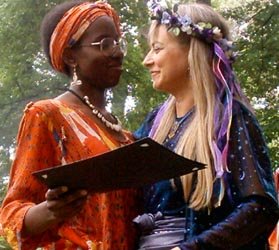 How does the Priestess Process affect the everyday life of a woman after the process?
McAndrew: In countless ways. I get lots of feedback from the partners in women’s lives. A lot of times partners are very concerned — you could even say worried — especially men, but also women partners, too, in lesbian relationships. They’re concerned that they’re somehow going to lose their partner. I’ve had lots of partners come to me afterward and say, “Thank you. It’s really enhanced, really enriched and really deepened our relationship.” So, that’s been a really good thing. Every once and a while, a relationship will part ways, but mostly it enriches relationships.

There’s a way that women demystify each other in the process. I’m sure this is true of men, too, that we mistrust our own sex in different ways. So coming to a place where women can lovingly embrace a group of sisters has a very healing and profound effect on women’s daily lives. They can begin to connect to women in their ordinary lives in a whole different way.

And they really do walk in that spiritual authority. Especially if they’re being ordained in the Madonna Ministry as a minister, they’ll find that they start having some kind of a ministry. People will automatically start coming to them for counsel.
Overall, there are a lot of shifts and changes in terms of practical reality, like “This is what I’ve always wanted to do and, by Goddess, I’m going to start doing it, whatever it is.” Sacred work is changed, relationships deepen or shift, and the way that they walk in the world usually becomes very different.